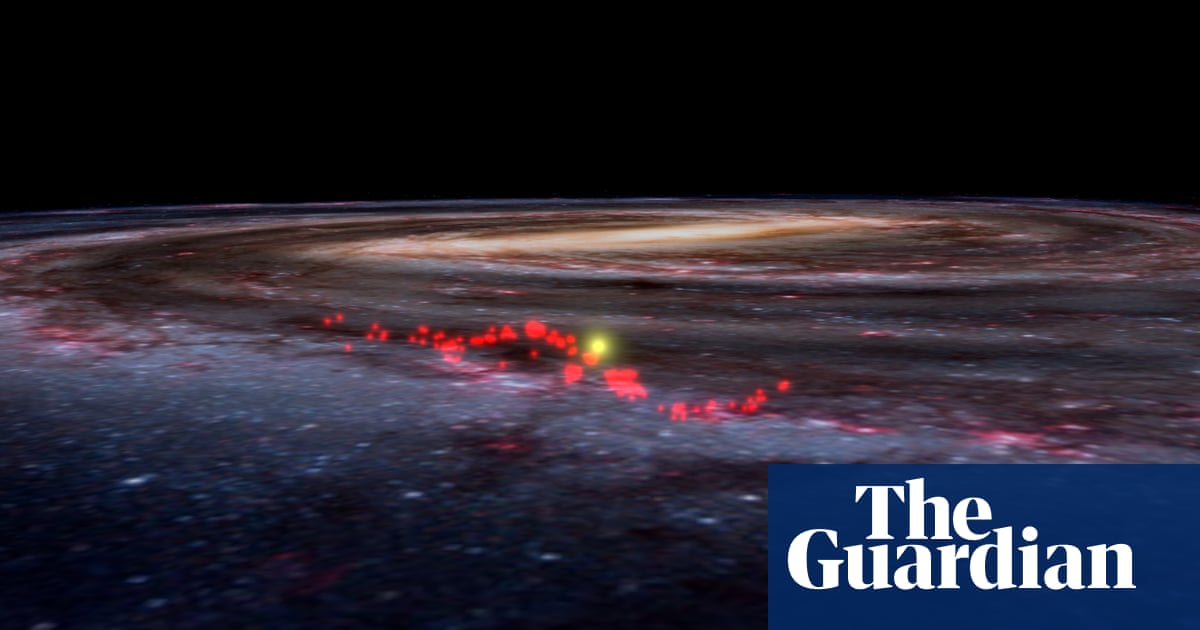 Astronomers have discovered a gigantic, undulating wave of dust and gas where newborn stars are forged over a 50 million billion mile stretch of the Milky Way.

The gaseous structure, which holds more mass than 3m suns, runs directly behind our solar system as viewed from the heart of the galaxy, but has eluded observation until now.

The spectacular string of stellar nurseries forms the largest known wave in the Milky Way and was announced, appropriately, at a scientific conference a stone’s throw from the surf mecca of Waikiki beach in Hawaii.

“It is the largest gaseous structure we know about in the Milky Way,” said Alyssa Goodman, professor of applied astronomy at Harvard University, who presented the findings on Tuesday at the American Astronomical Society meeting in Honolulu. “It’s right up in our face. It’s crazy that it’s so close by.”

Measurements of the wave show that it stretches over 9,000 light years and makes up what is known as the “local arm” of the Milky Way. Looking down on the flat disc of the galaxy, the wave appears as a straight line about 400 light years wide. But from the side, it rises and falls 500 light years above and below the plane of the galaxy. For comparison, the width of the solar system is about half a light day – the distance light travels in 12 hours.

The discovery has thrown up a raft of questions, not least around how the wave formed. One idea is that a much smaller galaxy clattered into that part of the Milky Way in the far-flung past, setting off ripples that spread like those from a stone tossed into a pond. A more exotic hypothesis sees a role for the mysterious dark matter that lurks unseen around galaxies.

If the wave was set off by a cosmic collision, the ripples may pull the enormous dense clouds of dust and gas around for millions of years to come before finally settling down. “We think the wave is dynamic but the timescale of its motion up and down, we really don’t know,” said Goodman.

The astronomers, including Catherine Zucker and João Alves, discovered the cosmic wave while mapping the distribution of vast clouds of dust and gas that pepper our galactic neighbourhood. Inside these dense clouds, gas can be compressed to such extremes that new stars are born.

To map the positions of the clouds, the scientists relied on the fact that just as the sun reddens at sunset, so starlight reddens as it passes through interstellar dust. With this in mind, they analysed the colours of stars whose distances had been measured with unprecedented accuracy by Gaia, the European Space Agency’s (Esa) spacecraft. The dust reddens the light of stars behind it, but has no effect on those in front.

Writing in the journal Nature the astronomers describe how the map revealed the shape of the giant wave of connected clouds. While earlier studies had suggested a huge ring of stellar nurseries around the solar system known as Gould’s Belt , the new map shows there is no ring, but a massive wave instead.

The sun may have originated in what the scientists have called “the Radcliffe wave”, after their home base, the Radcliffe Institute for Advanced Study. According to their calculations, the sun now lies 500 light years from the wave, but crossed it about 13m years ago, and may cross it again in another 13m years. An interactive online map shows the wave crossing the sky, passing the familiar constellations of Orion, Perseus, Taurus and more.

“It’s been a puzzle for decades as to why so many of our local Gould’s Belt star-forming regions lie so far out of the galactic plane,” said Jennifer Hatchell, an astrophysicist at Exeter University who was not involved in the study. “The previous expanding-ring model fitted cloud positions and velocities well but never entirely explained the fragmentary structure, rotation or the origin of the ring, which required the energetic equivalent of several supernovae.

“This alternative linear structure is just the sort of insight we hoped would come out of Esa’s Gaia dataset, and the team deserve credit for their excellent analysis and visualisation work. It will be interesting to see how this develops as explanations are proposed for its origin and relationship to the galactic spiral arms.”